As early cultures developed, the desire to trade goods led to the need for some kind of currency. Merchants assigned standard values to goods and required payment in precious metals. Electrum, a combination of gold and silver, was highly prized, and copper was also seen as valuable. Metal ingots served as an early form of payment, and the shekel became a standardized weight of metal. Abraham’s servant gave Rebekah jewelry with the weight noted. “The man took a golden nose ring weighting half a shekel, and two bracelets for her wrists weighing ten shekels of gold (Genesis 24:22).

In about 600 BC, Lydians began minting coins of electrum featuring the head of a lion. In the late 6th century BC, the Persians began minting gold coins, known as darics. These are the first coins mentioned in the Bible, and they funded the rebuilding of the temple. “They gave for the work of the house of God five thousand talents and ten thousand darics of gold” (1 Chronicles 29:7).

During the times of the Second Temple, the Tyrian silver shekel became the only coin accepted for temple taxes in Jerusalem, which required a half-shekel per taxpayer. Since Tyrian coins were pre-measured in shekels and half-shekels, and the silver was of the highest quality, the Jewish leaders must have felt compelled to ignore the fact that the coins bore the image of the pagan god Melkart. 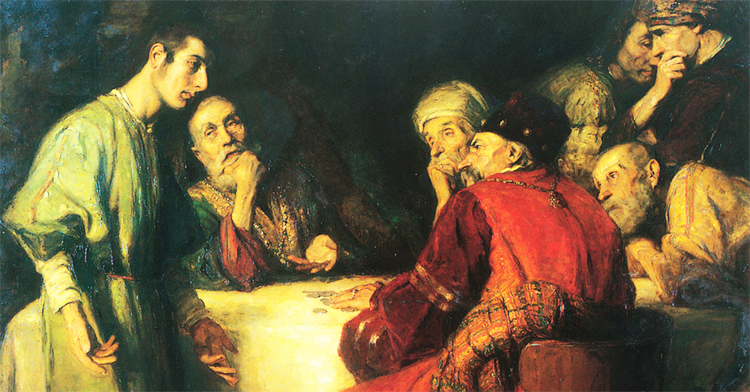 The Tyrian shekel may have been the coin that Peter found in the fish’s mouth to pay the temple tax for Jesus and himself. “…go to the sea, cast in a hook, and take the fish that comes up first. And when you have opened its mouth, you will find a piece of money; take that and give it to them for Me and you” (Matthew 17:27). The chief priests payed Judas Iscariot 30 of these silver pieces to betray Jesus. “Judas Iscariot…said, ‘What are you willing to give me if I deliver Him to you?’ And they counted out to him thirty pieces of silver” (Matthew 26:14–15).

In the 4th century BC, the Jewish people began minting their own coins: tiny silver coins bearing the inscription, “Yehud,” the Aramaic word for Judea. These coins feature an owl or an eagle and a lily.

As Alexander the Great conquered the Persian empire and Greek culture spread through the known world, people in the Holy Land adopted the use of Greek coins. Drachmas, the standard coin of the Greeks, equaled one quarter of a shekel. These coins typically feature the head of Hercules on the obverse and a seated figure of Zeus on the reverse.

After the death of Alexander the Great, his kingdom was divided between four of his generals. The Seleucids and the Ptolemies fought for control of the Holy Land. During this time, coins featuring the portraits of Seleucid and Ptolemaic rulers came into use.

In the second century BC, the Maccabees revolted against the Seleucids, and in the ensuing years, the Jewish people minted their own coins once again. The original Maccabean coins feature a lily on the obverse and an anchor on the reverse. These were followed by bronze prutot (plural of prutah) and lepton (plural of lepta) of John Hyrcanus I, the High Priest. These coins display double cornucopia and a pomegranate on the obverse and an inscription reading, “Yehohana the High Priest and the Council of the Jews,” on the reverse. A prutah equaled two lepta.

Alexander Jannaeus was the first Hasmonean king to mint coins bearing his own name. These coins featured an anchor along with the words, “King Alexander,” on the obverse, and a star of eight rays on the reverse. These coins became widely used and were likely the coins that the widow gave to the temple treasury. “Then one poor widow came and threw in two mites, which make a quadrans. So He (Jesus) called His disciples to Himself and said to them, “Assuredly, I say to you that his poor widow has put in more than all those who have given to the treasury” (Mark 12:42–43).

John Hyrcarnus II minted coins similar to those of John Hyrcanus I, displaying double cornucopia and an inscription. The coins of Mattathias Antigonus feature an ear of barley between a double cornucopia. His coins also depicted the vessels of the Jerusalem temple. In the first century BC, Rome took control of the Holy Land, yet the use of Hasmonean coins continued well into the first century AD. This may be due to Jewish nationalism, an act of defiance against Rome, or the result of religious reform.

Octavian, who later became known as Caesar Augustus, defeated Mark Antony and became the first ruler of the Roman Empire in 31 BC. Silver denarii (plural of denarius) were minted bearing his portrait, as were silver tetradrachm (the equivalent of a shekel) and smaller bronze coins. Jesus Christ was born in Bethlehem during the reign of Caesar Augustus. “And it came to pass in those days that a decree went out from Caesar Augustus that all the world should be registered” (Luke 2:1).

The Roman silver denarius equaled a day’s wages. The Pharisees asked Jesus about paying taxes to Caesar. Jesus answered, “‘Show me the tax money.’ So they brought him a denarius. And He said to them, ‘Whose image and inscription is this?’ They said to him, ‘Caesar’s’” (Matthew 22:19–21). The Roman drachma features in the story of the woman with the lost coin. “Or what woman, having ten drachmas, if she loses one drachma, does not light a lamp and sweep the house and search carefully until she finds it?” (Luke 15:8).

While Caesar Augustus ruled in Rome, Herod I, later known as Herod the Great, ruled as the Roman-appointed King of Judea. Herod’s coins featured a wide variety of emblems including tripods, prows, caducei, pomegranates, shields, helmets, palm branches, eagles, anchors, and cornucopias. Although they bore his inscribed name, the coins did not display the image of Herod, likely to avoid offending the Jewish people.

Following the death of Herod I, his kingdom was divided between three of his sons, Herod Archaelaus, Herod Antipas, and Herod Philip I. Meanwhile, a series of Roman Procurators ruled in Judea. The ones known to have minted coins include Coponius, Marcus Ambiuius, Valerius Gratus, Pontius Pilate, Antonius Felix, and Porcius Festus.

Of these, Pontius Pilate is likely the most well-know, for he was the one responsible for condemning Jesus Christ to crucifixion. Pilate issued two types of coins: a bronze prutah, displaying three ears of barley on the obverse and a libation ladle on the reverse; and a bronze prutah featuring an augur’s wand surrounded by Tiberius Caesar’s name on the obverse, and a date indicating the year of Tiberius Caesar’s reign on the reverse. “The Pilate entered the Praetorium again, called Jesus, and said to Him, “Are You the King of the Jews?” (John 18:33).