A couple of my friends from Jerusalem, died in the mid 1990s. They were especially interesting because of the key roles they played in the Dead Sea Scrolls drama. Ironically, their deaths went largely unnoticed by the public, though publicity surrounding the scrolls — with best-selling books, museum exhibits, lawsuits between scholars — has reached its highest level since they were discovered.

My two friends brought the scrolls to light in the first place. In 1946, a 13-year-old boy of the Ta’amira Bedouin tribe was hiking with an older friend in the cliffs on the western shore of the Dead Sea. Some say they were shepherds minding goats. Others observe that the Ta’amira Bedouins have dealt in antiquities for 150 years and they simply may have been combing those historically rich hills for artifacts to sell.

While throwing stones into a cave, the boys heard pottery break. They investigated and found several tall pottery jars containing leather and parchment scrolls. They took the scroll pieces to Jerusalem antiquities dealers, who chased the boys out of their shops. One exclaimed: “Those are old pieces of leather, not antiques. Sell them to a shoemaker.”

The boys took his advice. A shoemaker in Bethlehem named Kando also dealt in antiquities. He recognized potential in the scroll fragments and bought them, although at that time the oldest known written manuscripts dated back only a few hundred years. Eventually, Kando sold some of the scrolls to Samuel, the Syrian Metropolitan at the Monastery of St. Mark in Old Jerusalem. Samuel later advertised his scrolls in the Wall Street Journal.

Kando sold other scrolls to Professor E. L. Sukenik, chief archaeologist of Hebrew University. (Sukenik’s son, Yigael Yadin, later also acquired the scrolls the Syrian Metropolitan had advertised in the Journal, for the State of Israel.) 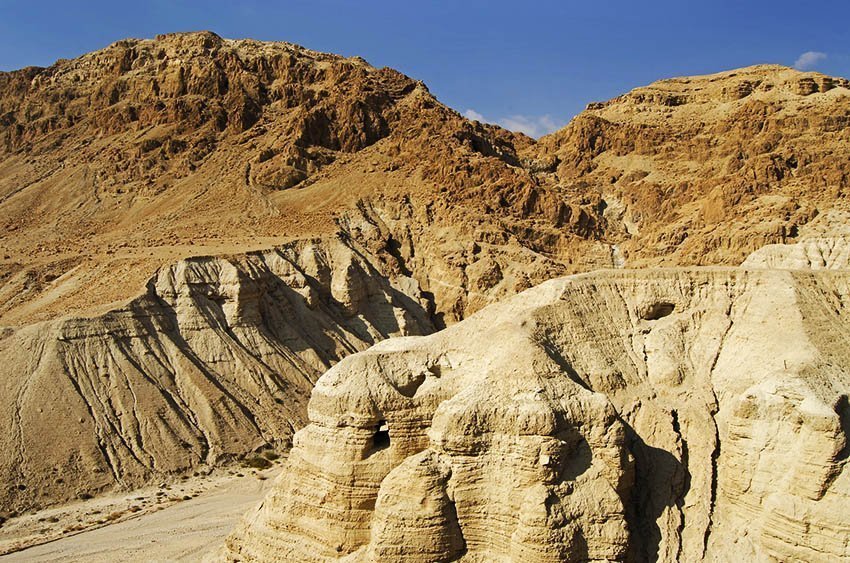 The Caves where the Scrolls were discovered at Qumran

When the 13-year old Bedouin boy who found the Dead Sea Scrolls grew up, headopted a new name, in the Arab custom, after his first son was born. Abu Ali a Tawil (father of Ali, the tall one — to differentiate him from a short Abu Ali with similar business interests) was well known by Israeli antiquities enthusiasts. General Moshe Dayan wrote that he often bought antiquities from Abu Ali, who also once saved the
famous general’s life.

Here’s how Gen. Dayan told the story in his book Living with the Bible: “I do not think anyone has ever succeeded in duping Abu Ali by trying to sell him a fake antique or a counterfeit coin. Whenever I bought anything from him, I could always be sure that it was authentic.

“One day I received a message from him telling me that he had a beautiful earthenware censer that he was sure would interest me. We arranged to meet in Jerusalem and there I saw it…. I bought it and asked where it had been discovered. Abu Ali said it was found in a cave south of Bethlehem. I asked him to take me there. I wished to see what kind of cave it was, whether a burial cave, a dwelling, or one used for pagan rites.

“He promised to do so and we fixed a date. But shortly before we were due to meet, he informed me that he was very busy and asked for a postponement. He postponed the next meeting too on some pretext or other. I refrained from interrogating too closely one so much smarter than I, and I just went on waiting. The hoped-for day finally arrived and we set out for the cave.

“We passed Bethlehem, and about half way along the road to Hebron we turned off westward along a dirt track in the direction of the foothills…. [I saw what] had once been a burial cave. The remains of skeletons were still there. But in the course of time it had been used as a sheepfold and as shelter for shepherds in heavy rains…. “Now that my curiosity about the cave had been satisfied, I asked Abu Ali why he
had kept postponing our visit. ‘Oh, Wazir,’ he replied, ‘this cave was being used at the time by a band of PLO saboteurs. It was they who began digging in their spare time and they who unearthed the ancient vessels and put them on the market. How, then, could I bring you here, you who are minister of defense? I had to wait until they moved elsewhere. Imagine what would have happened if I had brought you while they were still here. Either they would have opened fire on you, in which case your soldiers would have shot me; or you would have shot them, in which case their comrades would have suspected me of betraying them and delivering them into your hands, and then they
would have murdered me and my children.’”

Abu Ali died in Bethlehem at age 60. He had been ill with cancer for some time. I had often met with Abu Ali over the previous 20 years. For a while he owned a little nut and sweet shop near Manger Square in Bethlehem. Over six-feet tall, with a strong, handsome face always framed by a white kafeyah, the traditional Bedouin headdress, Abu Ali cut a colorful figure. When I visited Abu Ali, he sometimes showed me coins or antiquities. Over the years, via friends as interpreters, he told me many stories, including the one of how he found and sold the Dead Sea Scrolls to Kando. (*NOTE: After this ran the first time famous Jerusalem lawyer Arnold Spaer, now deceased, wrote me a letter and said that Abu Ali was NOT one of the boys who discovered the scrolls. HOWEVER….Abu Ali told me this story at least TWICE translated by Israeli friends fluent in Arabic…and furthermore Samir Kando referred to this more than once. I am not sure why Spaer—who WAS Abu Ali’s lawyer—took this position, but I wanted you to have all the info…)

It was only about three weeks before Abu Ali died that Khalil Iskander Kando, age 83, also of Bethlehem, died. Unlike Abu Ali, Kando had been an officially licensed antiquities dealer for decades. Kando operated a small shop in East Jerusalem, in a room above his gift shop, adjoining the St. George Hotel in East Jerusalem. Kando, called Abu Anton, wore a burgundy fez and traditional white robes each time I
saw him. A tall man with larger-than-life features, he took delight in showing me interesting coins and ancient artifacts. Kando never wanted to talk about the scrolls. Yet in a nook off the stairway to his tiny, second-floor antiquity shop stood one of the very jars in which they were found. No matter how often I asked, he would never pose next to it for a photograph.

Once in the 1970s, I sat across from Abu Anton, looking at ancient coins. He was cleaning one in a jar of dilute sulfuric acid he kept on his desk for that purpose. As we talked, he took a dental bridge out of his mouth and dipped it into the acid. Next he brushed it with the toothbrush he had been using to clean coins. Kando shook off the dental work and returned it to his mouth, resumed talking and never even puckered.

Abu Ali, the finder of the Dead Sea Scrolls, and Abu Anton, their first buyer, were both publicity-shy. Both were tarnished during the 1950s when, reportedly, some scrolls were deliberately cut up and sold in pieces to extract higher prices from the market. Yet the two men had honorable reputations. Ya’akov Meshorer, chief curator of archaeology at The Israel Museum, Jerusalem, told me that “From 1967, when we had dealings with him, Kando was always generous with the Museum.” When I telephoned my friend Samir Kando in Bethlehem to express condolences on his father’s death, he said, “Aye, David, we are only guests in this life. But what we touch may live forever.”