Dear Reader—I don’t know who told you that I “knew” any of that. I can tell you that this is the current approach to the “Tribute penny.” Some writers have made an effort to “prove” that the provincial tetradrachms of Augustus or Tiberius are more likely candidates, but that approach is very far-fetched in my opinion. On the other hand, it is certainly possible that the “Tribute penny” was a denarius of Augustus.

This story may be the best-known Biblical reference to a coin, and it is frustrating not to be able to identify it exactly (any more than we can identify the widow’s mite type exactly). However, let us look at the clues.

Thus at the death of Augustus in 14 B.C. Jesus was a lad of about 18. This means that during most of the time of the ministry of Jesus, Tiberius was the emperor, while Augustus was the emperor of Jesus’ childhood.

The MAXIM PONTIF denarius represents more than 98 percent of the known denarii struck under Tiberius. The other two types are quite rare indeed.

Neither the Augustus nor the Tiberius denarius coins are very common in the markets of Israel, and they never have been. In fact, the provincial drachms of Cappadocia are just as commonly seen. They do show up from time to time, but not in any sizeable quantities. (Sorry, the provincial tetradrachms of Augustus and Tiberius don’t show up too often here, either.)

With this information, the scholars of Biblical Coins of the 19th century, such as the Reverends Rogers and Madden, both tentatively identified the Tiberius denarius as the most probable type to have been the “Tribute penny.” This was always done with plenty of caveat. Throughout the 20th and now into the 21st century, this is the generally repeated lore.

We do not know, nor is it likely we will ever know any more. For those who want to show off a coin that was certainly SIMILAR to the “Tribute penny” of Mark, there is no doubt that either an Augustus or Tiberius denarius or drachm of any type would qualify.

You may not know that this is not the only mistake in the King James rendition of this story. In the original 1611 edition King James translation, this was mistakenly translated to the anachronistic “penny” and so it has been called (erroneously) ever since. This occurred because in Anglo-Saxon Britain, the Latin word denarius was transformed into the word “Penny,” the standard silver denomination of the time (denarius = denomination = penny). 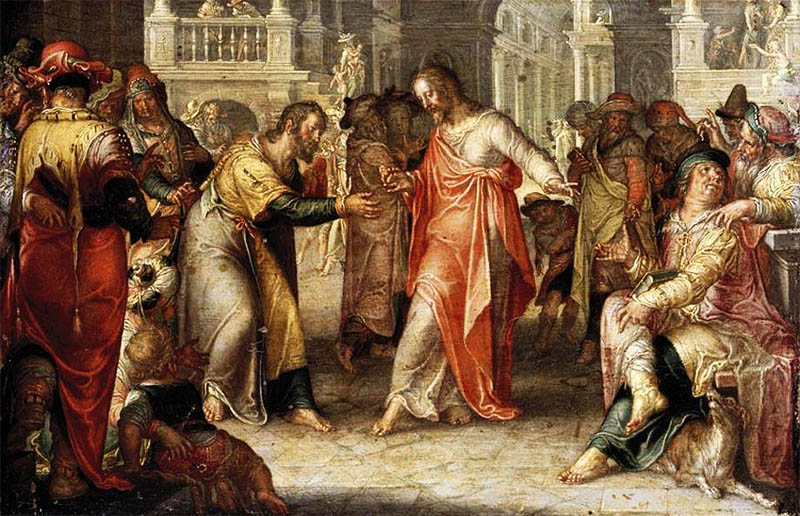 The Tribute Money, by Joachim Wtewael (1616)

The translators simply assumed that their current money was the same money used and referred to in the Bible. For hundreds of years the British have used the initial “d” (referring to denarius) as an abbreviation for penny or pence.

The Greek equivalent to the silver denarius was the drachm, which was the same size and value. Drachms are also found in markets and excavations of ancient Israel. Here are some other references to this denomination.

Matthew 18:28. “But the same servant went out, and found one of his fellow servants, which owed him a hundred pence: and he laid hands on him, and took him by the throat saying, Pay me that thou owest.”

Matthew 20:2, 9, 10, 13. This is the parable of the laborers in the vineyard: “And when he had agreed with the laborers for a penny a day, he sent them into his vineyard.”

Mark 6:37. “He answered and said unto them, Give ye them to eat. And they say unto him, Shall we go and buy two hundred pennyworth of bread, and give them to eat?” (See also John 6:&)